Rohingya Lives Matter As Well – Healthcare in the Rohingya Camps 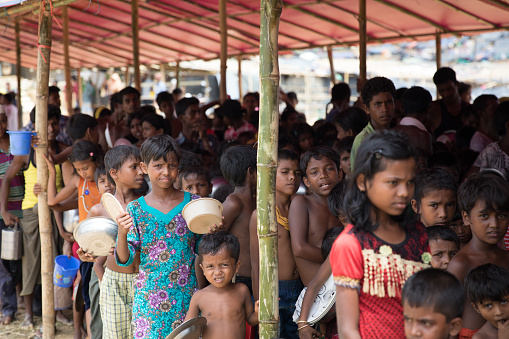 In the following article, I have tried to cover the lives of Rohingya, who face great difficulty accessing healthcare, indeed conditions have been worsening with increasing limitations on INGOs (International Non Governmental Organisations). The catchment area includes the camps in Sittwe and Pauktaw Townships. Those are the camps from Ah Nauk Ywe, Kyein Ni Pyin, Nget Chaung, and Sin Tet Maw villages. I learnt from my Rohingya friend that the Rohingyas in Buthidaung and Maungdaw Townships are living in more miserable conditions but I could not describe their lives since I have never been to those townships. But, that does not mean their lives are insignificant. All Rohingya lives equally matter as well.

Travelling to the Rohingya IDP (Internally Displaced People) camps has been so restricted in Rakhine State that even the medical teams of the INGOs who have been providing the routine primary health care and referral assistance to the IDPs have to submit the travel permission papers in every visit to the authorities at the jetty of the Kaladan river and the local authorities of the camps. That kind of restriction compounds the worsening conditions of the unequal health-care access of the Rohingya people.

There are no governmental health institutions located in the IDP camps, nor are there government healthcare workers, while there is an urgent need for the overcrowded IDPs to be able to access basic health-care. As a result, a large gap has emerged between the capacity of the healthcare workers and the urgent needs of the Rohingya people. To fill this gap, several INGOs have been working in this state, but the restriction of movement is still one of the barriers in implementing their tasks.

In referring the IDP patients in critical condition to the Sittwe General Hospital, a medical doctor has to consider several factors. The first one is the natural barrier, the ebb and flow of the sea tide. Since the IDP patients from the Sittwe and Pauktaw Townships have to be referred to the nearby Sittwe General Hospital (SGH), the only transportation route from the IDP camps to the SGH is through the sea by speedboat. The medical doctors from the INGOs based in Sittwe could not go to see and assess the emergency status of patients when the sea tide is in decline.

The second factor is the racial segregation of the Rohingya people. For example, when a medical doctor from an INGO thinks a patient from the IDP camp needs to be referred and brought by speedboat to the hospital in the evening, but a government doctor at the hospital thinks the patient doesn’t need to be admitted to the hospital, but the sea tide is too in decline to send him or her back to the camp. In that situation, IDP patients are not allowed to stay at night in Sittwe and most Sittwe residents, the Rakhine people, do not want to accept the Rohingya people in their homes as well. That kind of racial segregation is the barrier no one could feel and understand except the Rohingya people in order to practice their right to the health-care assess.

As far as I learn from my colleagues and the Rohingya Community Health Workers from the IDP camps, the IDP patient would not like to go to the government hospital even if the patient was in very critical condition and in need of government hospital admission and care. They felt afraid to endure the racist insult from the hospital staff, so some of the patients had chosen death rather than the lives at the hands of the racist hospital staff.

It is said the Rohingya patients have to live under the watchful eyes of the police just like criminals. Sometimes, police ask for money from them. They are insulted and beaten when they can not give money. And the price of medicines is raised more than the normal price when the Rohingya patients have to buy them from the pharmacies outside or inside the Hospital compound. One INGO volunteer said the seller ask for MMK 20000 when the normal price is MMK 5000.

Racism from the community members in Sittwe is another barrier as well for the Rohingya people to access healthcare. The residents in Sittwe barely want to donate their blood when the Rohingya patient needs a blood transfusion in an emergency situation, and they themselves would not want to receive donated blood from a Rohingya perspm as well even in critical condition. Though it would not be a big problem for the Rakhine since most of the residents in Sittwe are Rakhine people, the blood for the Rohingya patients has to be collected from the people in one Rohingya IDP camp at the outskirts of the Sittwe city.

Firstly, the government seems to want the INGOs to do the gap-filling and does not have any long term plan to take over the human resources and technical guidance from the INGOs. For example, INGOs have trained the community health workers (CHWs) from the IDP camps and they are currently working in the camps, but there are no government health centers, and sub-centers in the IDP camps. Thus, INGO-trained CHWs could not be introduced to the government staff to work together in the field and take over those human resources, if & when INGOs exit from the Rakhine State.

Lastly, coordination between several different INGOs are not strong enough to exert comprehensive and concerted assistance to the IDPs even though each INGO has spent a large proportion of the budget in the Rakhine Project, of which only a small proportion could benefit the targeted people. The INGO projects in Sittwe, rather, looks like a job pool for expats and national inpats, rather than the long-term plan to change the lives of the Rohingya people in the IDP camps. The above-mentioned factors combined would leave the Rohingya IDPs in the more miserable conditions when the INGOs practice the exit strategy and the buffer work on behalf of the government are rolled back from the Rakhine State. It is natural as well no INGO can guarantee to run the project in a certain place for a lifetime.